Without a doubt, Social media has become a big part of our daily lives. With each passing day, it grows larger in the number of users, information to share, and inevitably, the energy required to power it. The research focused on Facebook (FB) to gather the necessary information regarding energy use, user behavioural patterns, and other necessary information to calculate E[m]ergy values of  annual Facebook and users activities.

The lineage traces back the origin of any given subject through pinpointing the most significant milestones that ultimately lead to the emergence of the subject.

By tracing back Facebook’s lineage, the patterns and technological advances that contributed to the rise of this phenomenon, and ultimately, where it lead (The rise of Twitter, Google+, etc..).

The Lineage is divided into three eras, Pre-Cyber Socializing, referring to the means in which people communicated prior to cyber methods, The Cyber Age, The start of cyber networking to the emergence of Facebook, and Post-Facebook, which points to the social media platforms that were influenced by the Facebook.

Being taxonomy “the science of naming, describing and classifying organisms” we decided to consider Facebook and social media as part of the “social organism”. The first theory about “social organism” goes back to the late 19th century when French sociologist, Émile Durkheim, described the three “cores” of society as culture, politics, and economics, and the “health” of the social organism can be thought as interactions of the three “organs”.

According to Durkheim, “the more specialized the function of an organism or society the greater its development, and vice versa”. observing the main behaviours that have characterized social networks since their spread in the early 2000s, we analyzed four tendencies that rapidly developed to more complex and refined tools.

1. Chatting: communication and messaging among users have been one of the earliest and strongest push in the diffusion of social network, allowing people to converse freely and casually across the whole world.

2. Sharing: being “sharing” a basic component of human interaction, it has driven the activity of many users around the globe, becoming the fastest and coolest way to show your instant experiences, thoughts, and feelings through images and videos.

4. News/network search: the internet expansion has brought almost the majority of available information online, changing people habits of checking newspapers, books, and material resources to a new way of research: “goggling”. Social media are part of it, users share personal information, in addition to news, curiosities, interests, and passions.

Analyzing the large amount of surveyed data we were able to estimate the annual user average upload activity: it is largely constituted by the number of images and videos posted per year, while the number of posts and the chatting/texting activity count for a very small portion of the whole data.

The Centre for Energy-Efficient Telecommunications (CEET) in Melbourne estimates 2 kWh per GB of wireless data transmitted, which means Internet providers use 287,430,724 kWh per year to upload users data. 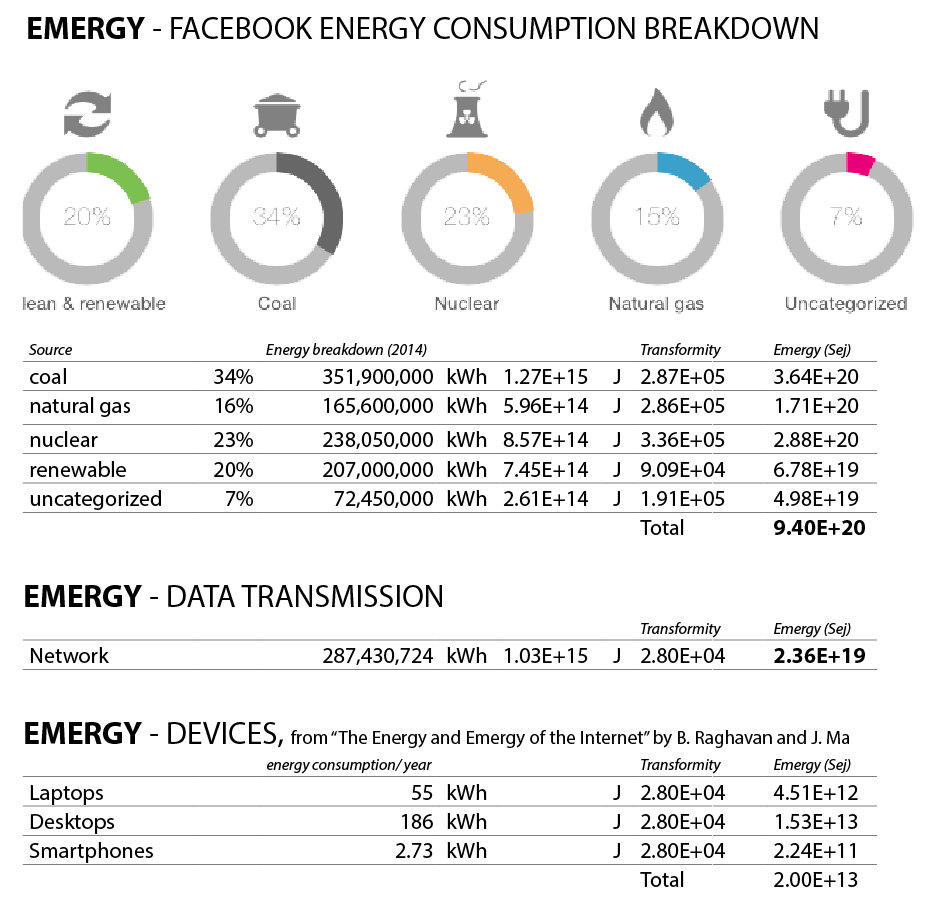